Do you live closer to Pennsylvania than New Mexico, Colorado, Wyoming, Idaho or Montana? If so, you don’t have to go all the way to the Rocky Mountains to hunt Rocky Mountain Rams! You can hunt them at Tioga Ranch in North Central Pennsylvania. We offer exotic game hunting trips, including Rocky Mountain Ram hunts. Notably, we offer 1-2-day guided hunts on our hundreds of hunting acres through sprawling woodlands, hills and valleys. Add an impressive trophy to your wall; our Rocky Mountain Rams are large and handsome, with hard-and-heavy horns. They make an ideal skull or shoulder mount. With lodging on the premises, and meals covered, too, Tioga Ranch offers the ideal Rocky Mountain Ram hunting experience in the Northeast. We can even skin and butcher your meat so you can conveniently take it home after the hunt. * Pricing ultimately depends on the size of the ram 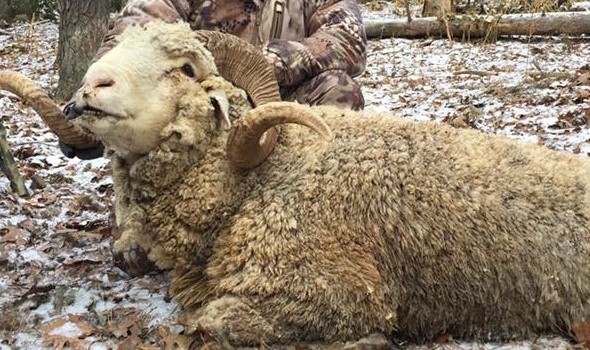 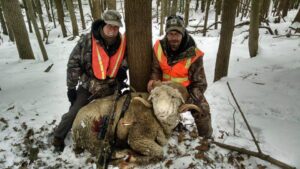 Rocky Mountain Ram hunts at Tioga Ranch are guided. Our guides are professional experts who help you find, kill and handle the animals, searching out the biggest and oldest trophy rams available. It’s a very physically demanding hunt, so only take this hunt on if you’re physically capable of covering rough terrain.

When you hunt at Tioga, you won’t have to spend days figuring out the lay of the land to bag big game. Guides are with you every step of the way, showing you where to look for rams, and helping you hit your mark. Plus, with meals, lodging and skinning/butchering as part of the deal, we’ve got you covered. Just show up and be prepared to hunt– and have a great time.

An Overview of Rocky Mountain Rams

Rams, aka male Bighorn Sheep, are known for their large, curled horns. They can be used as a weapon when one ram fights with another for dominance. And these impressive growths are also a status symbol– hunters definitely look for rams with huge horns. Some horns can weigh up to 30 pounds! 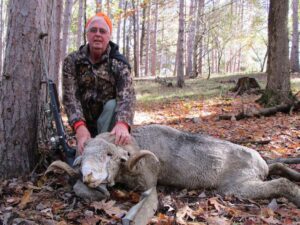 When rams fight for dominance or mating rights, they’ll face each other and charge ahead, up to 20 miles per hour. Horns will clash, repeatedly. Sometimes these fights last hours. Eventually one ram will “submit” and walk away, meaning the other one “won.” Because rams have thick and bony skulls, they usually can handle fighting without being seriously injured.

Interestingly, Rocky Mountain Rams are the largest wild sheep in North America. They’re typically brown in color with some white patches on their rump, muzzle and/or back of legs. In the winter, their coats are thick and double-layered, as well as lighter-colored than in other seasons. Rams have a large angle of vision, sharp hearing, and a great sense of smell. They also have the ability to make giant leaps and jumps, climbing up and down cliffs.

Most rams live about 10 years or so. They mate in the fall.

Here’s Why You Should Take a Rocky Mountain Ram Hunt

Rocky Mountain Rams are popular game animals. Hunters appreciate how challenging the hunt can be, oftentimes through rough terrain. Indeed, it can be a good test of one’s stamina and endurance trying to get one of these unique creatures. The reward? A beautiful trophy mount that wows the people who see it for years to come!

Rams are tough. So tough hunters like the idea of matching wits with one of the toughest animals out there. Rams are also smart and can be elusive– they’re not an easy catch. If you’re the type of hunter who doesn’t want to take it “easy,” and prefers going for “the big one,” then getting a ram at Tioga Ranch is the kind of experience you’d enjoy. Rams at Tioga Ranch average 180 pounds with about 1 ¼ curl horns– impressive, right? Exactly. When you want to impress your hunting buddies with tales of your hunts– and proof of what you got– then a guided Rocky Mountain Ram hunt at Tioga is just what you need to do!

To make a reservation or to inquire about guided rocky mountain ram hunting trips in Pennsylvania at the Tioga Ranch, call us at 570-835-5341