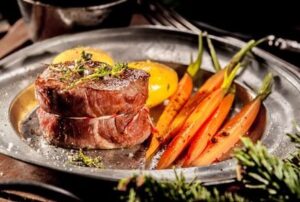 One of the biggest benefits of hunting is that it’ll allow you to bring home plenty of fresh meat. In some cases, you might be able to get enough meat to last you a long winter during a single hunting trip.

Harvesting your own meat by hunting is better for you than buying meat at the grocery stores. Here are some of the reasons why you should consider using hunting to harvest meat.

When you go hunting and bag, say, a deer, you will know exactly what that deer ate during the course of its life. Chances are, it ate things like acorns, grass, and the occasional vegetable—all things that were grown in the earth. Cattle, on the other hand, are often fed unnatural foods that affect the taste of the meat they produce later. You’ll get more natural and better-tasting meat by hunting rather than running to the store.

It doesn’t include any hormones or antibiotics.

While the cattle industry has made a point of regulating hormones and antibiotics, there are still some ranchers and farmers who give their animals these things. Some studies have suggested it might not be good for humans to eat the meat that is then produced by them. This won’t be a problem when you bring home meat you hunt yourself. You can rest easy knowing you’re not eating meat tainted by hormones or antibiotics.

Buying meat from the grocery store every week can be expensive. It’s easy to drop $50 or more on meat alone. But you won’t have to pay a dime once you’ve stocked your freezer up with meat you obtained by hunting. For the cost of a hunting license, a rifle, and some ammunition, you can get all the meat you and your family will need for the foreseeable future.

At Tioga Boar Hunting, we can offer you a wide range of excellent hunts. We can also help you butcher any meat you bring back from a hunt so that you can take it home with you. Call us at 570-835-5341 today to book a hunt.