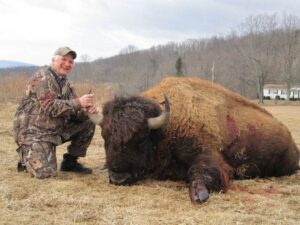 Some people mistakenly believe that bison and buffalo are the same thing. And it’s hard to blame them for thinking that. According to experts, even the earliest Europeans settlers who came to the U.S. way back in the 1600s used the words bison and buffalo interchangeably.

In reality though, bison and buffalo are not the same thing. They both belong to the same Bovidae family, and they both look slightly similar to the untrained eye. However, there are differences between the two when you look closely at them. Check out several of the biggest differences below.

Bison have much larger heads than buffalo.

Both bison and buffalo have heads that are on the larger side. But if you take a step back and compare the two, you’ll quickly see that bison have much larger heads than buffalo. This allows bison to use their heads as weapons when they want to. They can utilize their heads to fight off predators and to stake their claim to female bison when competing with other male bison.

Bison have humps on their shoulders that buffalo don’t have.

Outside of having enormous heads, bison also have gigantic bumps on their shoulders that are covered with very thick fur. You won’t see these same bumps on buffalo. Bison, therefore, have a much more intimidating stature than buffalo when you take their huge heads and enormous shoulder humps into account.

There are some buffalo out there that are every bit as heavy as bison. Generally speaking, bison can be as heavy as 2,000 pounds, while the average buffalo weighs in at somewhere between 1,200 and 1,500 pounds.

Have you always wondered what it would be like to hunt for bison or buffalo? Tioga Boar Hunting can give you the opportunity to experience it for yourself. Call us at 570-835-5341 today to talk about the pricing information for our buffalo hunts.