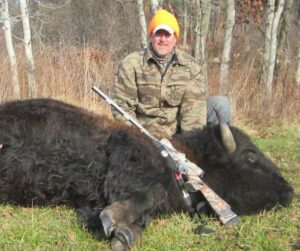 If you were to go to Buffalo, New York, and want to hunt buffalo you’d be out of luck. In Buffalo, the only living buffalo you’ll find reside at The Buffalo Zoo! That said, did you know that at one time, back in the 1500s, some 30 million buffalo (aka bison) lived in North America? My goodness that’s a lot– more than the population of New York City!

Now buffalo used to be plentiful, and some of them could weigh up to 5,000 pounds. As you can imagine, they were hunted for both leather and food. Eventually, they were even hunted just for the sport of it.

Get this: in the 1800s, there was a time when only 100 buffalo were left on the continent– hard to believe, right? But that was the case, and it has taken a long time since then to build up their numbers both in the wild (at places like Yellowstone Park) and on private farms and ranches. Estimates today peg the North American buffalo population at about 200,000.

Do people hunt buffalo today for sport and/or meat? Definitely. One large buffalo typically provides some 600 pounds of meat, which feeds a lot of people. People like eating buffalo meat because it’s considered leaner and healthier than beef.

While some states have made hunting buffalo illegal, there are quite a few where it’s perfectly legal to hunt and kill buffalo. Oftentimes, states issue a limited number of kill permits to hunters and set aside certain times of the year for hunting season, such as September through March.

If you want to hunt buffalo in Pennsylvania, Tioga Boar Hunting can make that happen. Our North American Bison can be hunted all year long; they weigh 600 to 2000 pounds, and both cows and bulls are hunted. Tioga Boar Hunting can skin the buffalo you catch, as well as butcher it and vacuum seal the meat. For those looking to hunt buffalo with the idea of Mounting them, the best time to do so is November to April; if you’re interested in just a European mount or meat hunt, then anytime of the year is great.