In this day and age, we are very fortunate to have refrigerators to keep our meat fresh without it spoiling. However, earlier cultures did not have technology at their disposal.

Many game animals, especially buffalo or bison, which were popularly hunted across the continent, are known to provide a vast bounty of meat, with some bulls providing more than 2,000 pounds of meat. That’s a lot of edible food to have go to waste, so how did Native American cultures keep all this meat preserved? 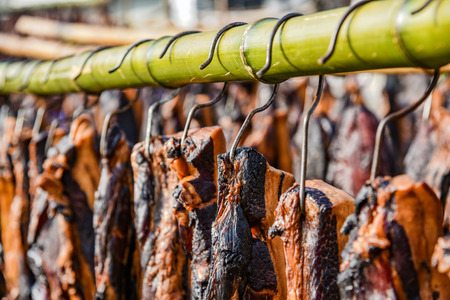 One of the most popular ways for Native Americans to keep their meat for longer was by smoking it. While salting was generally known as a good preservative option, salt was usually hard to come by which meant that smoking was one of the leading ways to preserve fish, bison and other meats. Smoking methods varied by tribe, and could be done either in a small enclosure or completed out in the open.

The meat would be laid out and exposed to the smoke of a smoldering fire for from anywhere from a couple of hours to several days, depending on the meat and the volume of meat to preserve, notes Off The Grid News. If there was a large amount of game or fish, for example, a smoking structure would often be built to more effectively smoke the meat. The Native Americans would then be able to keep this meat throughout the winter months.

Another common option was to preserve the meat by turning it into jerky, a method of meat preservation that is still popular today. This preparation of meat involved removing the fat from the game and cutting the strips into slices to be dried, says Indians.org. The strips would then be laid out in the sun to dry for a period, resulting in a portable and preserved meat that could be kept for a much longer period of time.

This particular type of meat preservation is perfect for leaner game meats such as elk, moose, buffalo or deer. The meat is prepared like jerky, but once it has dried, it is pounded into a powder-like substance. This would then be mixed with fat and berries, especially among tribes in the Great Plains, creating a high-calorie food that could last long into the winter months, says Quora.

Wasna is a special type of pemmican made by the Lakota tribe, says Off The Grid News. The meat used in this preparation is specifically buffalo. A mixture of choke cherries is pounded into patties and dried, then mixed with dried buffalo and a bit of kidney fat from the animal. The Lakota use a special stone to pound the mixture from a local river, claiming that it has important impact on the flavor, and wasna can be found in some locations still today as an authentic taste of Native American cuisine.

At Tioga Boar Hunting, we do not preserve meat like Native Americans, but we do offer butchering and vacuum sealing options to help you keep your buffalo meat fresh and flavorful for weeks and months after your hunt. To learn more about planning a trip for buffalo hunting at our ranch in southern Pennsylvania, call us today at 570-835-5341.